Summer of Haight 67 by Diane Sager

Enter to win a $15 Amazon/BN GC – a Rafflecopter giveaway

BLURB: KATHERINE RHODES has a tragic accident which sends her back in time. She wakes up as the 20 year old hippie she was back in 1967 in the Haight/Ashbury district of San Francisco. This was the period known globally as the “Summer of Love”. It’s all here, Hippies, Hells Angels, Black Panthers and the abhorrent war in Vietnam. “KATIE gets the chance to re-live this era with her friends FROG and MOONBEAM. This time she knows what to expect and tries to change things……….. Can she ?

Excerpt : Katherine Rhodes drove through the mountain range too fast. The rain was brutal and made visibility nearly impossible. She knew she was endangering herself, especially in this weather, but she didn’t care. If she crashed, so be it. In her present life there wasn’t much to live for. She’d turned sixty-six years old last week and her life was 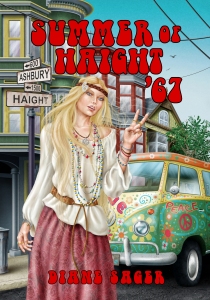 a farce. She had two grown children, both too busy in their own lives to bother with her. Her husband Mark had cheated on her numerous times during their thirty-eight year marriage. She had gotten used to the infidelity, but recently he’d actually run off with one of his “flings”. Katherine thought the novelty would wear off and he’d be back. It wasn’t the first time Mark had taken off with one of his girlfriends, but he always came crawling back. It had taken her totally by surprise when she was served with divorce papers that morning. According to a mutual friend, Mark was starting a new family and “they”, meaning him and Tiffany, wanted to be married before she gave birth. A baby! The man was sixty-seven years old and the mother-to-be was twenty-six. She was younger than both of his adult children for God’s sake. When Katherine was presented with the divorce papers she was numbed. She had never really been happy with her marriage, of course, but she was secure. Mark had his life, his work clientele, his friends, his private vacations, and his work related trips to Mexico. She had her own friends, her hobbies, and an occasional trip to an exotic location. She knew that Mark had his girlfriends, but she had lived with his indiscretions. Never in her wildest dreams did she imagine he would divorce her.

An Interview With the Author:
1. How long have you been writing?

I have made up stories in my head ever since I was a small child and I wrote sporadically throughout high school and university, but my first big venture was a vampire novel that I wrote in 2000. It sat quietly in a box for many years! Vampires? Box?……. Yeah, I know !……

As a busy high school teacher it didn’t leave me much time to write but then I made the move to full time writing about 5 years ago.

2. How long have you been a published author?

Publishing is a wonderful industry and when I got serious about writing and wanting to entertain people with my work, I was lucky enough to find some awesome people. Firstly, a lady who is a very well respected editor graciously took me on. I networked within this tight group with proof readers, formatters, an awesome artist for my cover art, and all this led to my first book being published in December of 2013. It’s a trilogy entitled EVIL VEIN. I wrote these under my apocalyptic/Horror name of D.S. Sager

3. What titles do you have available?

EVIL VEIN – Dark Beginnings is my first published novel
EVIL VEIN – Divide & Multiply is coming out next month. I will start on volume three by spring.

SUMMER OF HAIGHT ’67 is my supernatural time-travel book back to the famous San Francisco Haight/Ashbury hippie era in 1967. It’s my story wrapped around real events that took place. This was published in December 2014 and under my full name of Diane Sager.

4. What made you choose the subject of this book?

I’ll admit to being born in the 60’s – OK, you got that out of me, reluctantly!
As a very small child I can remember my parents driving me through the Haight/Ashbury district of San Francisco whenever we had visitors to my home in the South Bay area. We would look at the “freaks” as my dear old Dad called them. They were the “drop-out” youth sub-culture that flocked there in 1967. I love the 60’s music, clothes, politics and much more. I LIVED 1967 through research and writing for the year or so it took me to write the book..
I “met” some great people – Janis Joplin, the Grateful Dead, Micky Dolenz, even Charles Manson made an appearance! I mingled with the Hells Angels, the Black Panthers and the Diggers to name a few. This is a fictitious story based around real life events of sex, drugs and psychedelic music. My main character Katie has a horrific accident in 2014 and it hurls her back into her 20 year old hippie body – but with the memory of a 66 year old. It’s a trip, man!
There is the gruesome war in Vietnam and the political unrest and protesting that came with it. I learned a lot and my hope is that my readers will too.

5. Do you have any new titles coming soon?

As I mentioned earlier, volume 2 in my EVIL VEIN series is up next. It’s called Divide & Multiply and it carries on where volume one left off. A crazed scientist created a serum to try and cure his beloved, cancer stricken wife. It all went wrong and he unleashed his genetics altering drug on marine life. A mutated crab/scorpion , dubbed a “scrabion” can turn humans into zombies. It’s a struggle for survival by various eclectic characters. Some you will love and some…… not so.

Volume 3 will complete the EVIL VEIN series by fall of this year.

I finally found the time to re-write my vampire novel from 2000. The title is not caste yet !
I’m now four short stories in to my horror anthology. I hope to wrap this up and get it to my readers by mid year.

6. What is your favourite genre and why?

I started with vampires and kept the macabre/horror genre going in my writing. I guess it’s what I know best. I studied weird things as girl growing up in California. I have more that the average bear’s knowledge of serial killers, witchcraft and the occult, world religions and the supernatural. Oh, and I read Tarot cards. I’m weird huh?

7. What, to you, is the most exciting part of the writing process?

That feeling I get when the finished, printed and published book is finally in my hands is totally surreal. I LOVE this feeling and it makes all the long hours of hard work and stress worthwhile. I also learn so much when I do research. Knowledge is power !!……….SO, this is the high and then I worry and hope that my readers will like it.
8. If you could co-author a book with anyone, who would you choose and why?

This is a tough one, there were and are SO many brilliant authors but I have to go with Edgar Allan Poe. Obviously there’s no chance of that! He was a fascinating person and writer. Even his death 165 years ago is still shrouded in mystery. What an experience it would be to get inside his head and see how his mind works as we co-author a world class short story.

Perhaps I could write another time travel novel that takes ME back to the 1840’s and work with this master of macabre and mystery.
9. Where can readers find you on the web?

On Goodreads: Diane Sager or D.S.Sager 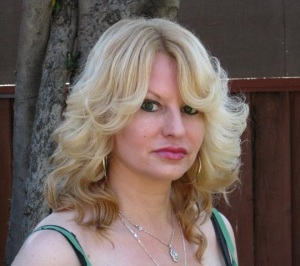 Author Diane Sager was raised and resides in the San Francisco Bay Area with her awesome husband Russ, three dogs, two cats and an African grey parrot named Storm. She holds a fascination for all things macabre and has developed a deep knowledge of serial killers, vampires, zombies, the Tarot, world religions, witchcraft, horror and the occult. However, her latest indie release, SUMMER OF HAIGHT ‘67 is none of the above albeit a little supernatural……..This story is
nestled between her zombie series “EVIL VEIN” published by Permuted Press and penned under her “apocalyptic” name of D.S.Sager A former high school teacher of emotionally disturbed and high-risk youth, Diane is now dedicated to full time writing.

3 thoughts on “Summer of Haight ’67 by Diane Sager”