Tears for a World
by Alexander Fernandez

The holy artifact bonded around Marisylia Malludar’s neck gives her incredible physical and magical powers—at a price. The bloody piece of vein is consuming Marisylia’s body inch by inch, her skeletal hands and feet only the beginning of a slow death. A cruel sorceress and her assassins are on the hunt for Marisylia to steal the artifact. Religious fanatics, volatile and unstable in their blind faith, also seek her to exploit the vein’s most dangerous purpose—liberating the erratic Creator of the World, Lysielle, from her 1,000 year incarceration.

With the vein the key to Lysielle’s freedom, Marisylia must use her abilities to survive long enough to find Lysielle first. Then her most grim challenge awaits—deciding if the Creator has truly repented for attempting to destroy all life. To achieve global peace, Marisylia must discover faith in the unpredictable Lysielle or rely on her own instincts to set the world’s fate.

In a secret chamber deep in the bowels of her fortress, Synicia paced the length of the stone room, the vein dangling in her fingers. For the past hour she had been trying to think of a new experiment to obtain its power. Floating overhead, a conjured sphere of light painted her moving shadow on the cracked, dusty wall. Her high-heels clicked on the flat rock tile, the long dress rustled with every pass around the area.

Holding the vein aloft and using various incantations had produced nothing. She then tried to pierce it to release some of the blood for a potion, but that method only resulted in broken knives. Trying to tear the vein with magic proved futile as well. The shard of earth had ripped the thing from Anessil’s body, but the weapon turned to dust the instant Synicia removed the vein from its tip.

What could she try next? She had to have this power. Fantasies of increasing her status and conquering more lands swam in her head. Synicia had no idea who Anessil was, nor did she care; she only desired the woman’s level of skill and strength. But the stupid vein taunted her. It laughed at her misfortune. It teased of unimaginable might she would never have.

Synicia cried out in rage and threw the vein against the wall. It hit with the sound of a wet plop and lay on the floor. Throwing herself on the ground, she scooped up the vein and shoved it into her mouth. Fighting off nausea and dry heaves, she swallowed the thing and sat still, waiting for something miraculous to occur. 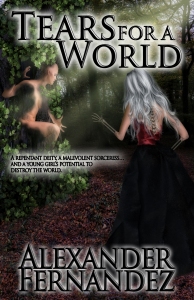 An Interview with the author:

1. How long have you been writing?

Hello to everyone, and much thanks to you for having me on your site! I’m no spring chicken anymore so my memory is fuzzy, but I believe I started dabbling in short stories when I was in 5th grade, so about 10 years old. I wrote some things for school, but I enjoyed it so much I started writing at home as well.
2. How long have you been a published author?

My first novel, Tears for a World, was released on 7 November 2014.
3. What titles do you have available?

This book is the first in the Lonely World Trilogy, so unfortunately it is my only title out at the moment. But I’m hacking away at the second, Tears for Love, and the third in the series, Tears for Life. I hope to have the second out by early summer. The entire trilogy should be out this year.
4. What made you choose the subject of this book?

As for the subject of deities or higher powers, many people have asked the question of what’s out there. And if faced with it, how will they react, especially if that higher power has the capacity for evil? This overall topic has always interested me, so I decided to throw it into the plot and have a young 16-year-old protagonist discover the answers for herself.

5. Do you have any new titles coming soon?

Besides the Lonely World Trilogy, there are always ideas swimming in my mind about new projects. Unfortunately, I barely have time to concentrate on my current books, so starting a completely new novel or series will have to wait. But I do keep notes on what pops into my head so I will be able to use the material later.
6. What is your favourite genre and why?

Fantasy has always been my favorite, although I have read many other genres and enjoyed them just as much. There’s something exciting about stepping into a completely foreign world with unique beings and beasts, and then seeing vast adventures unfold in them. Fantasy allows authors to express their wildest imagination, and readers with equally impressive imaginations to enjoy the experience.
7. What, to you, is the most exciting part of the writing process?

Hearing someone say they enjoyed your story. At first, writing is something personal and I feel thrilled doing it for myself, even if no one ever reads the darn thing. However, when you do decide to put a story out there, it’s cool to hear that someone was actually entertained by your hard work and didn’t laugh it off.

8. If you could co-author a book with anyone, who would you choose and why?

Lloyd Alexander would by my choice. This award-winning author was my hero as a child. His fantasy stories enthralled me to the point where I would have dreams about his books! His resume is quite impressive. How amazing would it be create a new story with this gentleman’s talent? May he rest in peace.

9. Where can readers find you on the web?

Feel free to include your latest release/promo, and any additional info you might like included! Thanks so much for being my guest. 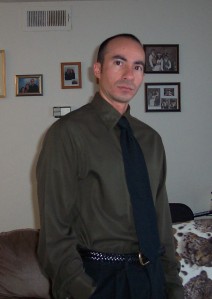 Alexander Fernandez was born in Santa Monica, CA and grew up in Rancho Cucamonga. Currently serving over 20 years in the United States Air Force, he lives with his wife Helem in Rocklin, CA.

Alex has been writing fantasy stories since early childhood for both school and for pleasure. He hopes to make a lasting emotional impact in his readers. He thrives in the exhilaration of creating memorable characters and adventures that become a part of the reader’s life.
Author site: http://www.authoralexanderfernandez.com/
Facebook: https://www.facebook.com/TearsForAWorld
Twitter: https://twitter.com/authoraf
Amazon: http://www.amazon.com/Tears-World-Lonely-Trilogy-Book-ebook/dp/B00NR6X71I/ref=sr_1_1_twi_2?ie=UTF8&qid=1421455620&sr=8-1&keywords=tears+for+a+world

8 thoughts on “Tears for a World by Alexander Fernandez”