by Allison A. Spector

Trouble’s brewing in the Evergreen Jungle. When controversial author Rex Jupiter plans a visit to a Bellingham bookstore, news of his arrival attracts the attention of the mysterious Paladin, who plans on leading a mob of rioting housewives against him. But the Paladin has competition. Sleuth-extraordinaire Marian Krause has her own bone to pick with Jupiter as she scrambles to solve the death of a woman who has stolen her identity. Rex may think he has the situation under control, but when the wrath of the local Druids is incurred, pitchforks and torches may be the least of his concerns.

“You…you saved me!” Phil stammered in disbelief. His head reeled with delirium as he stared at the wiry, tanned, vaguely mustachioed, brown-haired girl with the interconnected eyebrows, and he immediately thought of a young Frida Kahlo. Which was kind of awesome because Frida Kahlo was his favorite twentieth-century Mexican artist.

And even better, this girl was like some kind of acrobatic superhero. One who swooped to the rescue on a rope!

The thought that such a person existed make Phil’s brain fog over with awe. Or maybe it was the blood that had rushed to his head during his rescue. Also, there was the adrenaline of the attempted-suicide-turned-love-at-first-sight. Or maybe it was just his seasonal allergies. Whatever it was, Phil just couldn’t stop wheezing.

Abbie, too, appeared a bit overwhelmed. She fought back the temptation to mutter some too-cool-for-school rejoinder like “you’re welcome, kid” or “you can let go of me now.” But none of these suited the occasion. Thus, she simply lay on the rocky riverbank in the arms of the stranger she had just saved from imminent death. They were both soaking wet and grinning—happy to be alive.

And they should have been pleased with themselves.

It was not easy to unhook oneself from a harness and travel to shore with a rather large male in tow. She was glad for the lifeguard training she had taken during her Aquatic Superhero Phase. Phil had helped, too, with his half-hearted doggy paddle.

Yup, they were a good team.

How long have you been writing?

I’ve been writing since I was around 11 years old. At that point it was mostly poetry and prose, and verbal sketches of imaginary worlds. In fact, until recently, I considered myself primarily a poet. I only started writing full length works within the last five years.

How long have you been a published author?

Since December 2015. Well, unless you count the Flash Fiction I wrote that took 3rd in the Women on Writing Summer Writing Contest a few years ago. But Let’s Stalk Rex Jupiter is my first official, book-length work of fiction.

What titles do you have available?

Let’s Stalk Rex Jupiter is my first, but I am pleased to announce that a short sci-fi/fantasy story I wrote will be featured both in print and digitally in the Cost of Paper anthology produced by Black Hill Press and 1888.

What made you choose the subject of this book?

Writing is very similar to daydreaming for me. Wherever my heart and my brain wander, my fingers must follow across the keys of my laptop. When I wrote Let’s Stalk Rex Jupiter, I was thinking about the Pacific Northwest, and the magical people and places that exist within its mossy forests. I was also feeling a little homesick and a little whimsical. A story about Bellingham, WA made perfect sense within that context.

Do you have any new titles coming soon?

As I mentioned, I have a short story entitled Requiem that will be featured in the 1888 / Black Hill Press, Cost of Paper anthology in 2016. I also have an ongoing serial, The Fringers, on JukePop.com. It’s a story about a dystopian Jersey shore where reality stars reign supreme and privacy no longer exists for anyone.

What is your favourite genre and why?

I am a huge fan of science fiction, slipstream, cyberpunk, magical realism, futurist non-fiction, and humor/farce. I like anything that challenges the mind and sparks the imagination.

What, to you, is the most exciting part of the writing process?

The most exciting part of writing for me is watching my stories grow bit-by-bit every day as I put words-to-screen. It’s like planting a garden and taking an active role in pulling leaf and stem from the earth so that they have the chance to bloom. I also love submitting work to different contests and publishers. It doesn’t matter if it’s accepted or rejected—the real excitement and joy comes from knowing that every bit of writing I submit brings me one step closer to gaining some more precious writing XP!

If you could co-author a book with anyone, who would you choose and why?

I would love to team-up with an author who was talented, clever, in a similar place in their writing journey, and had either a compatible writing style and/or philosophical outlook on life. So I’m going to have to select / give a shout-out to some of my favorite JukePop authors – JA Waters, Laura Morrison, and Cat Sebastian. If I ever did a project with any of these three, I would be absolutely psyched!

I want to take a moment to give a shout out to the other two authors that participated in the Black Hill Press / 1888 / JukePop Summer Writing Project. They are Dean Moses, author of A Stalled Ox, and Shannon Barnsley, author of Beneath Blair Mountain. You can check out their books (and mine) at http://1888.center/swp/.

Thanks so much for being my guest.

Thank you so much for hosting me!! 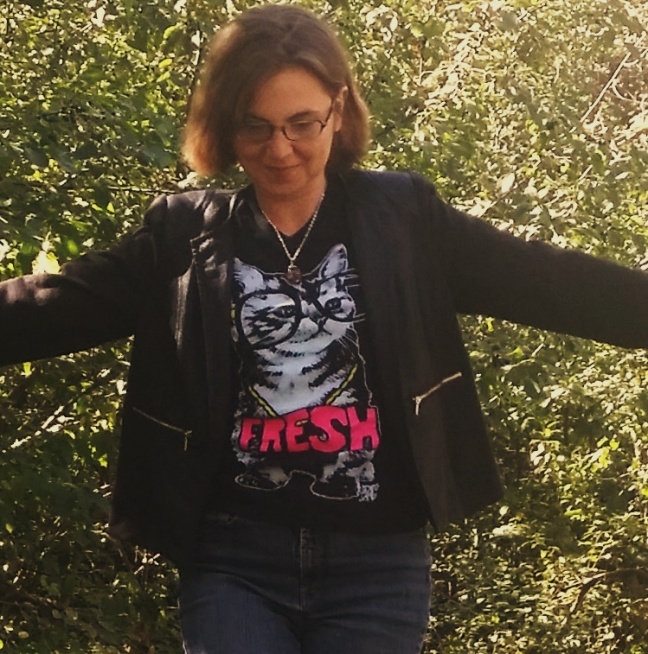 Allison Spector was born and raised in the hedonistic playground of the Jersey Shore, but finds herself oddly allergic to spray tan.  She is a proud graduate of Goucher College, and started her environmentally-focused career in Washington DC in 2005.  She moved to the Pacific Northwest in 2008, and fell in love with its beauty and people.  Allison is currently on a Midwestern Adventure and is determined to live as much life as possible—to accomplish her dreams one at a time—and to nurture her loving family, and blaze a trail of wit, whimsy, and eccentricity wherever she goes.

Allison Spector will be awarding a signed copy of book with original plot outline notes (loose sheets of paper) inside and additional notes at end or in margins of story (US/Canada only) to a randomly drawn winner via rafflecopter during the tour.

2 thoughts on “Let’s Stalk Rex Jupiter by Allison A. Spector”