When the Serpent Bites

Frederick Starks has it all—a gorgeous wife who was his high school sweetheart, three beautiful children, a mansion and cars others envy, millions in the bank, respected in his community, admired by his employees, loved and respected by loyal friends. He revels in the hard-earned power and control he’s acquired. As the saying goes, “All that glitters is not gold,” which Starks discovers when gut-wrenching betrayal by his wife sends him over the edge and into a maximum security prison. There, Starks is a new “fish,” stripped of nearly everything he’s always relied on. In that place, where inmates and guards have their own rules and codes of conduct, Starks is forced to face the darker side of life, and his own darker side, especially when the betrayals, both inside and outside the prison, don’t stop. He must choose which path to follow when the line between right and wrong becomes blurred: one that leads to getting out of the physical and emotional hellhole he finds himself in or one that keeps him alive.

The surveillance camera in his isolation cell was positioned in the corner of the high ceiling and to the right of the door. Starks calculated where in the cell the camera, angled as it was, most likely could not see him. One narrow space in the corner opposite where the camera was mounted seemed the ideal spot. He stood there to see if his absence from view drew anyone’s attention. With no clock or watch, he timed it by counting the seconds. Five minutes.

The door flap was flung open by a guard.

“You. Stand in the middle of the room.”

Starks did as told.

“What the hell are you up to in here?”

“Meditate on the bed, the bench, or with your head in the fucking toilet, for all I care, but stay out of the damn corner.”

The time was now. He lay on the mattress, tossing and turning, pretending a poor attempt to nap, and removed the shank, keeping it hidden in his hand. For several more minutes, he continued to play the role of a troubled sleeper, all the while going deeper into the feelings that he was a disgrace to his family and friends, and that life was no longer worth living.

He went to the blind spot in the room.

Quick efficiency would do the trick. He positioned the shank against his jugular. One quick slice, and in a brief amount of time—he hoped—all his pain and humiliation would be over.

Sweat began to run in rivulets down his face. Moisture pooled in his armpits, his groin, behind his knees. This hesitation is wasting valuable minutes. His heart hammered, willed him to live. Then he sensed an inner voice asking him to trust. A sob wracked its way up from deep in his core.

He flung himself onto the mattress, careful about putting the shank into its hiding place without being seen.

After several minutes, the adrenaline rush was over. His head, arms, and legs felt leaden. His brain craved rest.        He lay on the bed with his eyes open, unable to fight whatever thoughts demanded his attention, until a spider crawled across the ceiling and entered its small web in the corner. How had the spider gotten inside and when? And when had the industrious creature built its web? 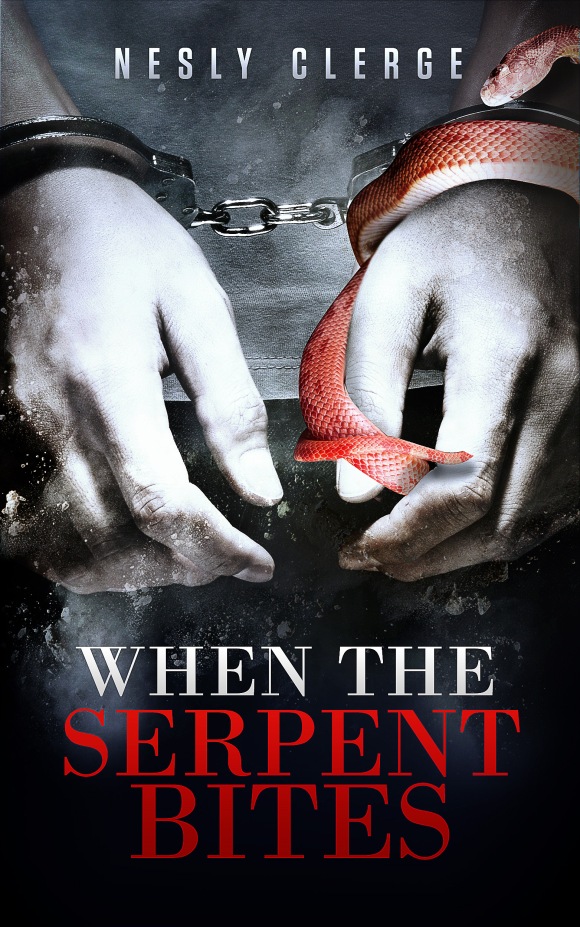 Nesly Clerge received his bachelor’s degree in physiology and neurobiology at the University of Maryland, and later pursued a doctoral degree in the field of chiropractic medicine. Although his background is primarily science-based, he has finally embraced his lifelong passion for writing. Clerge’s debut novel, When the Serpent Bites, will be available in 2015, with the sequel to follow in 2016. His debut novel explores choices, consequences, and the complexities of human emotions, especially when we are placed in a less-than-desirable setting. When he is not writing, Clerge manages several multidisciplinary clinics. He enjoys reading, chess, traveling, exploring the outdoors, and spending time with his significant other and his sons.

Nesly will be awarding a signed paperback copy of When The Serpent Bites to a randomly drawn winner via rafflecopter during the tour.

2 replies on “When the Serpent Bites by Nesly Clerge”