Jane Austen Lied to Me

What college girl doesn’t dream of meeting Mr. Darcy? Lizzie was certainly no exception. But when Darcy Fitzwilliam comes into her life, he turns out to be every bit as aggravating as Elizabeth Bennett’s Fitzwilliam Darcy. So what’s a modern girl to do?

Jeanette Watts’ satire pokes loving fun at Jane and all of us who worship the characters who shall forever be our romantic ideals.

This afternoon I got further confirmation that I’ve been seeing an awful lot of Michael.  I was wandering back to the apartment, when Lon hailed me from one of the couches inside the lobby doors.

“I have a message for you from your boyfriend,” he said, kind of stiffly.

I looked at him stupidly for a moment.  “My what?”

“Your boyfriend was here.  He said his phone was dead, so he couldn’t call or text you to tell you that he can’t stick around for dinner tonight.  He has a late meeting with a new client and he had to rush back to the office.”

I was still having trouble with the boyfriend thing.  “Wait – do you mean Michael?”

“If that’s the guy you’ve been seeing the last couple of months,” Lon said with a shrug.  “The one you’re always having dinner with.”

“He’s not my boyfriend,” I protested.  “He’s an old friend of the family.  We grew up together.”

Lon’s head was back at his computer screen.  “Boyfriend, friend.  The guy who kisses you goodnight all the time after he takes you out for dinner.  He’s not coming tonight.  I’ve delivered my message, that’s all I’ve got.”

Right then Allie walked up.  “Hey, Lizzie!  Waiting for Michael?”

“No, he’s not coming tonight.”  I headed to the elevator with her.

“That’s a shame.  I know how much you enjoy having dinner with him, even if he does aggravate you a lot.”

“Yeah.  It’s kind of a love-hate relationship,” I agreed.

Discussion With the Author :

Topic:  What inspired you to start writing?

Even though I don’t write Science Fiction, the answer is Star Wars. When I was in 4th-6th grades, I used to tell my own Star Wars stories to my best friend while we’d walk to school. It was like a soap opera, every morning I’d give her the new installment on my characters. In a way, though, the who inspired me to write is as important as the what; these Star Wars stories were all just in my head. It was that best friend who asked me to retell some of my past stories to a third friend. I kept missing parts in the retelling. That’s when Terri looked at me and asked, “Do you mean to tell me you aren’t writing any of this down!?” If it weren’t for her, I’d never have started writing.

There’s another really important “who” that is the reason I’m an author, not just a person with a lot of half-written stories in my head and on my computer. My friend Leah, who has a dedication in my first book. I’d been working on the book off and on for years. But Life is full of demands and distractions that were getting in the way of having a completed novel. I knew if I ever wanted to finish the book, I needed to reprioritize my life. I was getting the laundry done, and the errands, and the cleaning, but not the writing. To help me change that, she called me every single day, and asked me one question – “Have you worked on your book yet?” At that point, I’d put down whatever other thing I was doing, and I’d sit down to write. Or I’d get to it later if I could. I couldn’t stand it if I went too many days answering “No” when she asked the question. It really did help me focus my priorities. 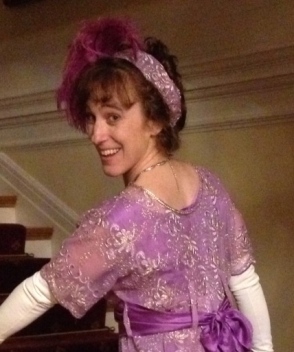 Jeanette Watts had been writing historic fiction when the inspiration for Jane Austen Lied to Me hit her on the drive home from the Jane Austen Festival. The idea was simply irresistible, and she put aside other writing projects in order to focus on writing a satire, thinking it would be a “mental vacation.” It turned out to take every bit as much research to write a modern story as it does to write a historical one.

She has written television commercials, marketing newspapers, stage melodramas, four screenplays, three novels, and a textbook on waltzing.  When she isn’t writing, she teaches social ballroom dances, refinishes various parts of her house, and sews historical costumes and dance costumes for her Cancan troupe.

Jeanette Watts will be awarding a doll dressed in Regency clothing, handcrafted by the author (International Giveaway) to a randomly drawn winner via rafflecopter during the tour.

2 thoughts on “Jane Austen Lied to Me; Jeanette Watts Author”