This post is part of a virtual book tour organized by Goddess Fish Promotions. Ada Stone will be awarding a $10 Amazon or B/N GC to a randomly drawn winner via rafflecopter during the tour. Click on the tour banner to see the other stops on the tour. 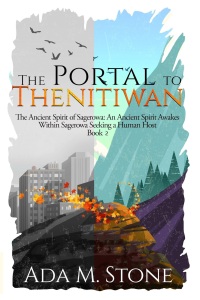 Over 9,000 years ago, an ancient spiritual energy leaks through a link in time entering Thenitiwan, destroying the barrier between the past and future. The spirit enters a host or Hawopas to block the portals spiritual gravity through carnal energy of a living body to survive.

Over the centuries, a powerful civilization called Sagerowa emerges knowing that history favors the rise and death of great nations throughout time. Sagerowa eventually gained control of the gateway and entered future eras and destroyed them to weaken them and sought to freeze their era in time forever.

Many years later in the midst of the tension of the nation’s most recent war, Joie tries to return home with the assistance of Xuca who escorted her to safety. Xuca however is unable to look after her and be loyal to his goals and let her go as a priority. She soon finds comfort and resolve in a stranger named Keogx from the pain of missing the soldier she felt had her back and unknowingly more parts of her heart.


Read an Excerpt from Book Two:

“Is there something wrong soldier?” asked head to the soldier who just arrived finally.

“Where have you been, soldier?” asked head.

“I was worried about Suyoke. He is still irresponsive,” She said with difficulty.

“Have you seen General Daeli by any chance?” asked the head to Lahi.

“Sir. He left on the mission with Ero. I was going to go with him. But he suggested I stay here to watch Suyoke and be here for the army if they never made it back,” she said.

The head looked at the general who last seen Daeli then at Lahi standing before the court suspiciously.

He then directed his eyes back to Lahi who tried to hide her pain for her fellow soldier Suyoke.

“Lahi, you must have heard at some point that the mission was cancelled right?

“No sir. I wasn’t informed. I was last told it was the mission was official and was excited to go but…” Lahi stated.

There is a great clamoring throughout the court room. There was random talking and voices of disproval and surprise.

“We have a problem. They could be out there anywhere, by now. In danger or an unauthorized battle with the enemy army, or worst. We will have to send a search team. They couldn’t have gotten far. Unit 1 shall be asked to go. Please take off tonight. Or we might lose them…all,” said the head council member.

The doors swung open a second time and everyone looked in that direction wondering who would enter.

“No need for that head council,” said Captain Rhena.

Everyone stood up and stared at the entrance.

Walking into the court room after her was General Daeli who stated, “Nobody has to go anywhere.” He said with a look of assuredness on his face. We’re back now from the mission. Following them was Ero and then Guesa.

The court was astounded and relieved.

Staring at them surprised for a while, the head council member then said, “Welcome back.”

Rhena smiled and said, “Thanks.”

Rhena said, “I have a message from the other side of this war. The enemy are making their plans to weaken us. They have new strategies. I must inform the army on what we can do. I am prepared to update the S.S. They are ready to bring us down and will if we step into their traps. They’re out there.”

Unit 1 General said, “I am glad they showed up when they did. Because I wasn’t going to budge,” folding his arms looking at Daeli who stared back in opposition and then turned away.

Xuca stood among the rest of the crowd of soldiers celebrating. He looked at Daeli whose eyes met his and then looked away trying to ignore his fixed look of “Told you so.”

“You may report,” said the head to Rhena. “But you four soldiers must recover from the expedition first. For now, this court is dismissed. Returned first thing tomorrow,” he hits the hammer. The members and soldiers stood and gradually exited the door.

Rhena looked at General Daeli and said, “Thanks, for being loyal to your comrades Daeli. You showed me something today. It’s never too late for people to change. People do change,” said Rhena to him.

“Or begin to show their true colors?” Daeli replied sternly then slightly smiled.

Rhena turned to Ero and Guesa, “You must all soon get rest, understand? And I will do the same.

“Yes captain,” the unit said together.

Guesa looked at Xuca who looked back at her for a while. As they looked at each other. He felt guilty for not joining the cause to bring her back. He now knew it was risky but worth it. He looked over at Lahi thinking.

“Guesa,” shouted Lahi who ran towards her and hugged the soldier. “We thought we’d never see you again. I can’t believe you’re ok! It’s been just so long.”

“Come. I will update you on everything,” said Lahi.

Through the crowd Xuca walked by. “Xuca, I am glad to see you again and that you’re safe. …” said Guesa.

“Same here, thanks,” he continued to walked.

“I heard you were being targeted while gone away. I went after you to help but then I was capture, I am sorry I couldn’t help,” she said.

The new leader then brushed shoulders with Xuca and said, “Since you are no longer leader. You are just “a” soldier. But don’t worry. I will soon take your given seat as leader. Just watch. I heard it never truly belonged to you anyway.” The leader then walked out the court room along with the rest.

“I have got to go, goodnight,” Said Xuca cutting the conversation short and walked out of the court room.

About the Author: I am Ada Stone and have been writing since high school and interested in societal problems and of course, fiction. The ability to make up a world and share it means a great deal as the real world is what it is.


5 replies on “The Portal to Thenitiwan”

A site to buy the books in either ebook or paperback from. 🙂

Thanks so much for sharing your terrific book. I sure enjoyed reading about it and appreciate you taking the time to share it with us.