by Julie A. Burns

When Lydia Blackwell visits her dying father for the last time, he reveals the deeply hidden truth about her mother. After the funeral, the stranger Derek Meade gifts her with a gorgeous antique purse. But before she has the chance to connect with the man who knew her father intimately, Lydia finds Derek murdered in his home.

Lieutenant Sonja MacIntosh is assigned to investigate Mr. Meade’s death, but her career on the force never prepared her for Lydia Blackwell. As Sonja works to solve the murder, Lydia takes the greatest risk of her life in leaving Chicago to search for clues to her mother’s past. Their instant attraction surprises them both, but even through the chaos Lydia can’t deny the intensity of her feelings for the strong willed Lieutenant.

Lydia’s possession of the antique purse throws her already chaotic life into a whirlwind of kidnapping, blackmail, vengeful mob bosses, and mind-numbing revelations. Through it all, Lydia must find the strength to accept herself – and those closest to her – despite their darkest secrets. 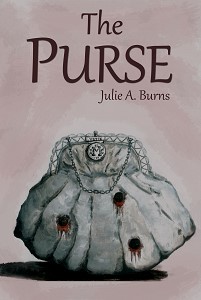 As she walked into the bedroom, the smell of her father’s cologne lingered even through all the sickness that had been in the air. Stepping over to the deep walk-in closet, Lydia opened the double doors to reveal her father’s suits, ties, and shoes. She made a mental note to have Rosita donate her father’s clothes so they didn’t hang like a shrine. She stared at every inch of the closet until her eyes fell on a small shoebox buried on the top shelf. Lydia retrieved the step-ladder from within a hidden compartment in the closet’s wall and stood on it to pull down the shoebox. Without thinking, she strolled over to her father’s bed, sat down, and went through all the memories kept in the cardboard box.

Many were just baby pictures of Lydia, and then she discovered a picture of her mother when she was pregnant. How beautiful she was; she looked so happy and carefree. What in the world could have happened? More questions, no answers. Lydia decided to keep the picture with her. Digging deeper yet into the box, she also found pictures of her father and Derek together. They made a handsome couple, though it was still difficult to believe her father had been involved with a man. At least true love hadn’t escaped him as she’d previously thought.

Julie A. Burns is a native Iowan born in Marshalltown, Iowa and raised in Davenport, Iowa. After her parent’s divorce at age 7, she took to writing, whether it was her diary or poems about people she met or situations that bothered her. After graduating from high school in 1983, she spent time working as a Nurse’s Aide in different nursing homes in Iowa. In 1989, she gave birth to a daughter, Brittany and raised her as a single parent. In the same year, she enrolled at Iowa State University in Ames, Iowa. She graduated with a Bachelor’s Degree in Sociology in 1994. Since then, Julie has spent time working with developmentally disabled adults and the mentally ill throughout Iowa and also in Wyoming, where she lived for 6 years. Julie currently lives in Waterloo, Iowa with her spouse. When she’s not writing, she enjoys being a grandmother to 3 year old Sophie.

Julie will be awarding 1 printed book of The Purse or 2 ebooks (The Purse and a second of their choice) from RRPI to a randomly drawn winner (international) via rafflecopter during the tour.

3 replies on “The Purse by Julie A. Burns”

Thank you so much for hosting RRPI’s book by Julie A Burns!
http://ramrampublishing.com/index.html